It was Friday evening, May 27. 2011. I’ve got a photographic memory for dates and numbers, by the way. Some details just inexplicably stick in my mind.

I had the brother of my heart, Phil and his girlfriend, Jamie over for dinner. (He’s no longer legally my brother in law, but divorce couldn’t take him away from me). I love cooking for people, and this time was especially good, if I do say so myself.

We had finished eating, and Phil and Jamie were having dessert as I started the dishes. I heard my phone vibrating and said out loud, “Todd Hall? What’s he doing calling me?” I answered, hoping he couldn’t hear my pulse hammering in my ear.

He said he was coming to town to see a movie, and asked if I wanted to go too. He’d already asked our mutual friends Jeff and Susan and they had plans, so he thought he’d see if I was busy. I thought, “Really? You’re straight up admitting your first choice didn’t pan out? Oh well, I’ll take it however I can get it!” I asked him if he’d had supper and he said he’d planned to eat popcorn. I volunteered the meal I’d just cooked. He wisely accepted. Oh yeah, I got you where I want you now, buddy.

I laid down the phone and said, “Okay Phil and Jamie, nice to see y’all! Thanks for coming! Out you go!! Todd Hall just asked me to the movies, and I’m about to use my mad cooking skills to reel this one in!” (When you love people, you can shoo them out when you need to and they still love you back, ya know.)

I remember thinking several times, “Is this really happening?” I hadn’t been to see a movie with anyone but my ex husband since high school. What if I was doing this wrong? Am I sitting the right way? Do I smell good? What if I have popcorn between my teeth? I had been single for several years and was a self avowed man-hater. Oh I wasn’t good at this. At all.

Our mutual friend Susan had introduced us the year before because she thought we’d be good together. She promised me Todd was a great catch. Lord knows he was handsome, but what was inside mattered more to me. Everyone said Todd Hall was the nicest guy they knew. Great dad. Family man. Good Christian. Not one negative word, and you can believe I’d checked him out.

If I was ever going to have a man in my life again (and I was PERFECTLY okay if I didn’t), it needed to be someone who came with high recommendations from someone I trusted. I really wasn’t ready to go out with anyone when I met him, but during that year, we’d spent more time together, and I was ready to drop my wall a little bit and give him a chance.

Todd Hall made me re-think my man hatin’ ways. Maybe, just maybe, there was a good man out there who was single . . . .

He was the perfect gentleman that night — and that was very important to me too. When he walked me to the door, said goodnight and gave me a sideways hug, I simply prayed, “Lord, Your will, not mine.” God knew my heart more than I did, and He knew I didn’t want to trust anyone and get hurt again.

Two days later, I was teaching an adult Sunday School class. As I got up to speak, a man I didn’t know, and still don’t know, stood up and started to the front. He stopped at the podium, handed me a dozen yellow roses, and said, “I’m sorry. I don’t usually do this kind of thing. I don’t even know your name. I drive a truck and Friday evening as I was coming home, the Lord said to me,

Go buy your Sunday School teacher some flowers and tell her, ‘You’ve had a long season of thorns, but now is your season of roses.’

Let me tell you, it was hard to get my composure to teach. “Season of thorns” didn’t even begin to touch it, I thought. More like, “Valley of the Shadow of Death.” Oh how badly I needed to believe “A Season of Roses” was headed my way.

After worship, this same man came up to me and said, “I didn’t want to say this in front of everyone, but I’m assuming you’re divorced, and it hasn’t been an easy road for you.” I nodded and said, “To say the least.” He went on to say,

The Lord told me it’s a man. Your season of roses is a man. He’s giving him to you, the one He wants you to have, and I think you’ve already had a date with him.

Since no one really knew that, I was in shock for a moment and said, “Well, I did have a date Friday night. My first one since my divorce actually.” He said, “That’s him. He’s the one the Lord is giving you.” I asked him what time did the Lord tell him all of this, and he said “About 6:30.”

Not surprisingly, that was about the same time Todd had called me.

Like Mary did in Luke 2:19, I treasured this word and pondered it my heart. I kept it to myself because I needed to see if what the guy said was true. The Bible says in 1 John 4:1,

do not believe every spirit, but test the spirits to see whether they are from God.

For that reason, I waited a year or so to tell Todd about it — long after I was absolutely sure this man who gave me flowers from Jesus was 100% right. I remember Todd’s eyes were big as saucers as he said, “Jesus gave you flowers? This dude was talking about me? Why didn’t you tell me about this?”

Really? I said, “What was I supposed to say on our second date, ‘By the way, Jesus sent me flowers Sunday. And He said He was giving you to me. You’re the one! Don’t you feel special?!’ What would you have done if I’d said that?” He said, “I would’ve thought you were crazy, and I’d have gotten up and run out of PF Chang’s!”

Folks, sometimes it’s best to keep a word from the Lord to yourself for a while . . . even when you know the truth in your heart.

This is a picture of my roses that day.  Yellow roses will forevermore mean a gift and word from God to me. 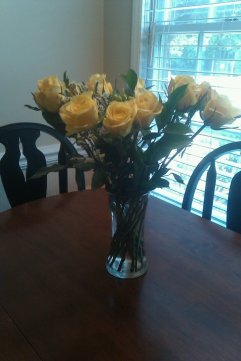 I’ve got his last name now. I love his kids like my own. My kids adore him. I’ve never had one doubt — never once thought maybe this wasn’t the right path.

Thank You, Jesus, for sending me flowers. For sending me Todd Hall and his whole family. Yes, there will still be valleys and hard times. But for today, I’m still enjoying my Season of Roses.

And it feels good.

19 thoughts on “Jesus Sent Me Flowers”