This past weekend, we got to reminscing about dc Talk’s “Jesus Freak,” and we YouTube’ed some of their old songs. I could still sing along with every line! Immediately, I was taken back to a time and place where I spent my days surrounded by teenagers who were themselves a bunch of Jesus Freaks. Those days will always be some of the best memories of my life. Lord only knows where that CD is now, so I’ve already ordered me another one (free shipping, of course — Amazon Prime ROCKS).

“Colored People” was one of my favorite songs on “Jesus Freak”. In case you weren’t one of the cool kids listening to hip contemporary Christian music in the ’90’s, here’s some lyrics:

Pardon me, your epidermis is showing, Mister
I couldn’t help but note your shade of melanin
I tip my hat to the colorful arrangement
Cause I see the beauty in the tones of our skin

We’ve gotta come together,
Aren’t we all human after all?

If you need some fresh songs on your iPod, throwback to some old school dc Talk. You’ll be glad you did.

Also last weekend, we were in Charleston — just days after the senseless slaying of nine of our brothers and sisters in Christ at Emanuel AME Church. Incredibly, the shooter said he almost didn’t do it because “they were so nice” to him. It’s simply impossible for me to fathom how a human being could be so full of hate that he would kill innocent people — people who had not only never done a single thing to him, but also who had welcomed him with open arms into their Bible study. I’m certain those nine people were in turn welcomed with open arms by Jesus, who said, “Well done, My good and faithful servants.”

I felt compelled to go to the church, to pay our respects, and to pray for this family of God as they deal with this tragedy. News crews were all over, but they didn’t disrupt the reverence. The heat index was over 100, and someone was handing out bottles of water. Todd asked her how much, and she said, “They’re free”. Love was as tangible as the humidity.

Person after person walked up and placed flowers, many shedding tears and holding hands. The prayer on my heart was, “God please let Your love cover hate.” I took these pictures, and I’m sure many more flowers have been placed by now. 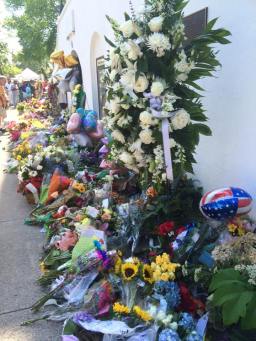 It reminded me of Joseph in the Old Testament. His brothers hated him and sold him into slavery, but God used the situation to promote Joseph, provide for the Isaelites, and even to restore their family relationship through love and forgiveness. Joseph said in Genesis 50:20,

“You intended to harm me, but God intended it for good to accomplish what is now being done, the saving of many lives.”

Although the shooter meant to start a race war, he failed miserably. Quite the opposite happened. Charleston is a town unified. And the unity is spreading. He took the lives of nine people, who gained eternal life on the spot. Sudden death meant sudden glory for the martyrs of Emanuel AME Church. If we look at it from the spiritual realm, it was a great victory! But alas, we are left here to deal with the fallout in the physical world.

Let me share a couple of stories with you — you’ll find a lot of those in this blog.

Story #1: My grandpa raised tobacco (that’s pronouced “tuh-BAK-uh” for you non-Southerners). When my daddy was about 5 years old, a new family moved into the farm next to theirs. His only playmates were his siblings, and he was thrilled to have some new kids to play with. Only these children were different. They were black. Daddy was afraid they wouldn’t want to play with him because his skin was a different color.

Meanwhile back at the ranch, his older brother, Jim, had a black Model-T Ford in the barn that he was painting. Daddy’s little five year old brain began to devise a plan . . .

He had finished painting his 3 year old sister, Mary, head to toe with black car paint, and she was in the process of painting him when my Grandma Bunton went to find out why her two toddlers were missing. I can only imagine her reaction! “What in tarnation!?!” Daddy explained how he wanted to go play with those new kids, and he was afraid they wouldn’t play with him if he didn’t look like them. Grandma told me she took half their skin off scrubbing them with turpentine! A word to the wise: car paint doesn’t just come off with a bar of soap.

Story #2: When Lindsey was still an only child, our next door neighbors were black. They had a little boy the same age as Lindsey, and we would frequently watch each other’s kids so we could run errands or have a date night. One day when Cameron was at our house, Lindsey said, “Mommy, why is Cameron’s skin brown?” I told her that was the way God made him. Simple answer for a simple question. That was good enough for her, and she ran off to her room to play Sesame Street with Cameron.

We aren’t blind. We all look different and we know it even at the earliest of ages. But what we DON’T know, is hate, judgment, prejudice, and superiority. Those things are not just taught, they’re CAUGHT.

Somewhere along the way, the Charleston shooter caught the idea that it was okay to hate people, to judge them based on the color of their skin, rather than the content of their character. Be careful what people catch from you, folks. Spread love over hate. Love is the only thing that overcomes hate, and it ain’t gonna spread itself. It’s our responsibility to do the spreadin’.

We live in an evil world, and sadly, more horrific acts like the Charleston shootings will mostly likely go down in the books. But there is good news! I’ve read the end already, and love wins.