fixers, not my circus, not my monkeys

I loved it when the teacher asked me to take names when she left the room. (Do they even do that anymore!?!) I wanted everyone to be doing what they’re supposed to be, even when the teacher wasn’t watching.

Lest you think I was the tattle-tail of Mrs. Temple’s first grade class at Rena Bulluck Elementary School in rural Pleasant Garden, NC, I didn’t WANT to tell the teacher if anyone was unruly. I would instead “encourage” them to behave in her absence.

Although I’ve prided myself in never getting a spanking in school — and if I HAD gotten one, I’d’ve gotten another one when I got home — I DID get my hand paddled with a ruler, I spent quite a bit of time in the corner, and I was forever writing sentences. I still remember what I had to write: I must learn to listen. There were two reasons I had to stand in the corner, got my hand paddled, or had to write sentences:

Fast forward from the first grade to high school, circa 1981.

Same “helper”. Defined: enabler. It’s been said that “helping” is the sunny side of “control”. I’ve actually been known to write term papers for people — don’t tell Mrs. Loggins! Why couldn’t I look around and say, “Not my circus, not my monkeys?” I carried problems that weren’t mine to bear even as a teenager.

Same friends. Here are five of us in the 10th grade. There are more girls, but sadly I don’t have a picture of all of us! 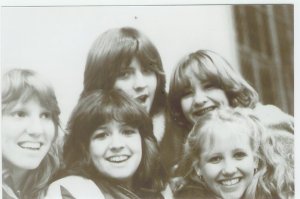 Same mouth. I wasn’t in the National Honor Society. Oh I had the grades. But back in the day you also had to have good conduct grades. I wasn’t rude or disrespectful to my teachers. I didn’t cheat on tests.  Although I usually had all A’s, it was glaringly apparent which classes I had with my friends, especially Misty or Tammie, who were quite the talkers as well. It didn’t matter when the teacher moved us to opposite sides of the room, we would just pass notes and use hand signals.

A typical conversation every time I brought a new report card home:

Daddy:  Well I can see you have a few classes with Misty or Tammie. Any IDIOT can sit there and SHUT UP.

Me: But Daddy! If I can talk the entire time the teacher is talking and STILL make an A, doesn’t that mean I’m super smart!?!

He never bought it. He would waltz right in my room, unplug my rotary phone, and slam it down beside his recliner — where it would stay until I brought up my conduct grade. Then I had to use the phone in the kitchen, trying to stretch the cord as far down the hall as I could. It was a fate worse than death.

Now I’m all grown up (more or less). Those three things haven’t changed since the first grade.

The mouth: Still gets me in trouble from time to time, but honestly, I’m a lot better than I used to be. My daddy and my teachers tried their best, but only God could work that miracle!

The friends: My school friends are still my best friends. As adults, we still laugh too hard and talk too loud (again, mostly me, Tammie and Misty!). These girls have walked me through every mountaintop and valley of my life. 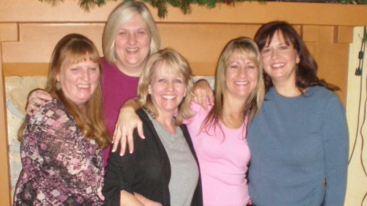 The “helper”: This one caused me to hit rock bottom. I was barely alive from trying to keep all the plates spinning. I found out the hard way that sometimes, actually MOST times, what other people are doing isn’t my business, even when it seems it is my circus and those are my monkeys!

In the last recorded conversation Jesus had with Peter in John 21, Jesus is trying to tell him something very important. It’s Peter’s life mission, laid out by the Savior Himself. Jesus told Peter: “Care for My sheep” (that’s us!). When you REALLY need your kids to do something, you don’t trust telling them once. Sometimes you tell them twice, or even three times. This wasn’t just important for Peter to do, it was vital. So Jesus told him three times.

At this point, one might think Peter would say, “Can you give me a four point sermon on how to do that? What exactly do you mean when you say, ‘feed Your lambs’ and ‘take care of Your sheep‘? I want to make sure I’m doing it right!”

Nope, not Peter. This is the same dude who impetuously jumped out of the boat and walked on water until he took his eyes off Jesus. Same guy who denied Jesus with a curse the night of His crucifixion. I bet he was as shocked as everyone else to hear what came out of his mouth sometimes. (I can relate!)

Instead of continuing the discussion about the directive to care for the sheep, Peter incredulously asks in verse 21,

Lord, what about him?

Oh I can see this scene now. He gives a quick nod towards John. Let’s move on past what You want ME to do, Lord, and talk about what You want HIM to do. What’s the deal with John?

What is that to you? You must follow me.

Those are words for us “fixers” to live by. I’m not the Holy Spirit. I need to keep my focus on MY mission, not anyone else’s. I can’t fix people. I tried, and I crashed and burned in epic form. Not that I don’t help people when they ask. I probably do too much for my children even now, but I’m a work in progress. My life has much less chaos when I clean up my side of the street and leave everyone else to clean up theirs.

Of all the things I’ve had since I was six, I think I’ll keep my BFF’s, watch my mouth, and leave fixing people to God. After all, this is HIS circus, and WE ALL are His monkeys. He can handle the spinning plates better than I ever could.