My daddy and I went to live with my Grandpa and Grandma Bunton, and my aunt Bet, when my parents split up. While Daddy was working as a telephone man at Southern Bell, I stayed home with Grandpa and Grandma, fussing when Grandpa’s electric razor made the Old Rebel and Captain Kangaroo fuzzy on the old black and white TV.

Daddy met a beautiful telephone operator at a union meeting named Martha and fell in love with her. Before long, so did I. She had green eyes and long, dark hair with big curls — and three school -aged children — and I adored her. On a blustery, cloudy day in November 1969, they went to the Justice of the Peace in Greensboro (since no preacher would marry them because they had both been divorced), and she took on a new husband and his four year old daughter.

I was sitting in the floor playing with my Lite Brite when they walked in at Grandpa and Grandma’s. I jumped in her arms and said, “Can I call you Mama now?” For reasons that were outside my control, my parents were divorced, and I knew in my heart that God had given her to us. Daddy and I both needed her — badly.

We moved into her house and blended our families. Mama quit her job and stayed home to raise me. She watched the Old Rebel and Captain Kangaroo with me, only she didn’t run an electric razor and make the TV fuzzy.

I couldn’t wait for my new brothers and sister to come in from school every day. Mama had supper on the table when Daddy got home from work, and she would let me help her cook and clean. It was a happy time.

It wasn’t until I started school that I realized I was different. None of the other kids had two moms. Their siblings had the same last names as they did. They weren’t going out of town to visit their non-custodial parent like I was. In the early ’70’s, blended families were the exception.

Before long, I began to feel the sting at church. Some parents didn’t want their child at my house to play because my parents were divorced. I guess they feared we were a bad influence, or maybe their child would catch divorce cooties. I never understood it.

Mama was undeterred. Even though no preacher would marry her and Daddy, and some other moms shunned me, she held her head high and kept taking me to church. Again I’m forced to say, the world has never hurt me — but people who name the Name of Jesus have caused me great pain.

Jesus was different like me. He also had a stepparent, and the religious community shunned them as well. His mother, Mary carried the son of another Man — the offspring of the Holy Spirit Himself. Joseph was skeptical of taking on a child that wasn’t his, but Matthew 1:20-21 tells us,

. . . an angel of the Lord appeared to him in a dream and said, “Joseph son of David, do not be afraid to take Mary home as your wife, because what is conceived in her is from the Holy Spirit. 21 She will give birth to a son, and you are to give him the name Jesus, because he will save his people from their sins.”

Although Jesus didn’t belong to Joseph, he made the conscious CHOICE to love and raise Him as his son. He didn’t have to. He could have put Mary away and decided to find a wife with less baggage.

No angel spoke to Mama, and I surely wasn’t conceived by the Holy Spirit! But she took Daddy and his baggage anyway. I got the same love, and the same discipline, as her biological children. Because of her, I can cook, clean, sew, do any craft I set my mind to — she’s the reason I am the wife and mother I am today. I had the best example I could ever have hoped for.

She could have been just my stepmother. I’ve never called her that because of all the Cinderella/wicked stepmother images that come to mind! Instead, she chose to be my Mama. Every time I hear Brad Paisley’s, “He Didn’t Have to Be,” I still get a catch in my throat.

It could have gone a different way. She didn’t have to quit her job to stay home and raise me. I was mouthy and sassy and loud. I cried when she made me wear anything lacy. I didn’t like sleeping alone. I refused to stop sucking my thumb no matter what she did — to the tune of a lot of expensive orthodontic work. I put the dog in my bed when she left my room every night even though she didn’t want him on the furniture. I’m sure I was quite the bratty little sister to Ricky, Jo Anne and Dean as well.

Even with all of that, she loved me and treated me just like she treated her other children. She always made us a cake on our birthday’s. 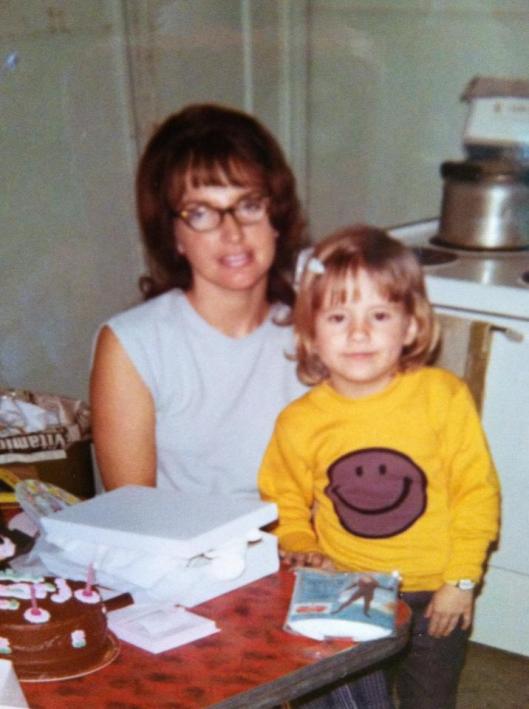 So when I grew up, I set my mind to do all the things she taught me to do. I made her one when it was her birthday.

They were married 36 1/2 years before we lost Daddy. She lovingly cared for him until his last breath, and he died laying right next to her. Thank you for loving him, and for loving me, Mama. We never would have made it without you.

Who would have thought that God was using her not only to prepare me to be a wife and mother, but also how to blend a family with love one day? Now I’m in Mama’s shoes. I married a man who already had two children. Because of her example, I’m dedicated to loving Joseph and Kelly as the two new blessings I’ve been given, treating them the same as I treat my biological children. Through blurred vision with grateful tears, I thank God my husband loves my children that way as well. We got them a lot later than Mama got me, but I pray they will always be thankful they were given not just a stepparent, but a second Mama and Pops.

Sadly, divorced families are no longer the exception. There are untold numbers of children living in homes without both biological parents. If you find yourself with children who don’t share your DNA, please, please, please look into that face that doesn’t look like yours, and love that precious child. Treat them like they were birthed to you, loving them unconditionally . . . like next generation depends on it — because it does.

8 thoughts on “She Didn’t Have to Be”